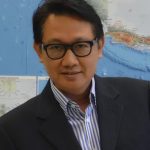 Dr. Arif Havas Oegroseno leads the Indonesian Embassy in Berlin since 8 May 2018.
Previous to his ambassadorship to Germany, he was Indonesia’s Deputy Minister of the Coordinating Ministry of Maritime Affairs. In the latter capacity Dr. Havas Oegroseno served as President of the 20th Meeting of the 162 State Parties to the UN Convention on the Law of the Sea (SPLOS).

Before his vice-ministerial position, he was the Indonesian Ambassador to Belgium, Luxembourg, Head of Mission to the European Union and the World Custom Union from September 2010 to January 2015. Likewise he worked vis-à-vis NATO on maritime security issues. A career diplomat and an expert in international law of the sea, he has served in the Indonesian foreign service for over 25 years. Ambassador Oegroseno graduated LLM from Harvard Law School and SH (Bachelor of Law) from the Faculty of Law, Diponegoro University, Indonesia. He lectures regularly in various Indonesian and foreign universities.