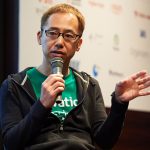 Ikuo has been involved in Internet related business since the late 1990s and participated in the planning and setup of WebCrew Inc. In 2000, he co-founded and became the CEO of Interscope, Inc. (Internet research company), which was sold off to Yahoo! Japan. In 2011, he assumed the position of Tokyo Officer of SunBridge’s seed acceleration activities, and in cooperation with Mr. Takeuchi of VentureNow, he launched “Innovation Weekend”, a pitch event and networking platform for early stage startups and angel investors. In January of 2012, he co-founded SunBridge Global Ventures Inc..