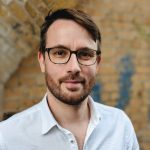 GINSEP Workshop: India as a destination for German Startups
Tuesday May 14 | 11:30 AM – 1:10 PM
Matchmaking Area

Before joining the German Startups Association to lead the GINSEP in September 2018, Julian was working in India for five years. During his assignments he helped German companies enter the Indian market at a German management consultancy in Delhi, as a Senior Project Manager, and at the AHK in Pune. Before that he worked for a German NGO for two years and was involved in a number of projects in the development cooperation sector in South Asia and Africa. Julian specialised on EU-India-relations during his Master in European Studies and he holds a Bachelor of International Communication from Groningen, the Netherlands.