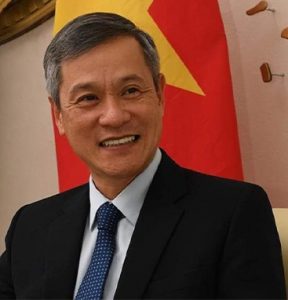 Ambassador, Embassy of Vietnam in Berlin

Dr. Nguyen Minh Vu assumed his position as Ambassador of Vietnam in Berlin in December 2018. He joined the Ministry of Foreign Affairs of Vietnam in 1993 and has since held various positions, in both bilateral and multilateral diplomatic affairs. Prior to this assignment, he served as Assistant Minister of Foreign Affairs, Director General of the Consular Department, and Director General of the International Law Department. Ambassador Nguyen Minh Vu is a graduate of the Moscow State Institute of International Relations (MGIMO), where he earned his PhD in international law.