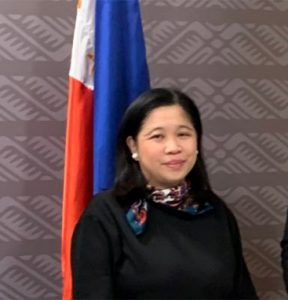 Ambassador, Embassy of the Philippines

Philippine Ambassador to Germany Theresa Dizon-De Vega has over 25 years of experience in the diplomacy and governance sphere. She previously served as Consul General in New York, USA, Minister and Consul General in London, UK, as well as earlier diplomatic assignments in Hong Kong and Mexico.

Ambassador Dizon-De Vega has likewise served in senior positions in the Department of Foreign Affairs including Chief Coordinator-Office of the Secretary (Minister). She has degrees in Law, China Business Law, Literature and Cultural Studies from the University of the Philippines, Ateneo University School of Law, University of Hong Kong, and Queen’s University-Canada. She is active on social media and is a keen follower of digital innovation.